New 52 Action Comics Volume 1: Supermen and the Men of Steel 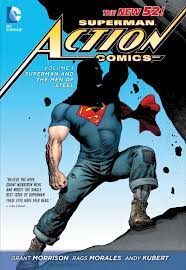 W: Grant Morrison (Sholly Fish on backups), A: Rags Morales & Andy Kubert (Brad Walker & Chrisscross on backups)
This is one of the most enjoyable collections for several reasons, but one is just the luxuriant bulk: 8 issues, plus backups equivalent to 1.3 issues. For – by one measure(*) – the senior title in the stable, largely written by one of the premiere comics writers of all times, this is generous.
This is the “5 years ago” long version of the Superman origin story in the New 52. Morrison got a solid run – 19 issues, I think – but not a “legendary” one. However, it’s all well rated, and justifiably.
Chronologically, we should start with Issue #5 (“Rocket Song”), Issue #6 (“How Superman Learned to Fly”)”  and then the two backups written by Sholly Fish and drawn by Chrisscross: “Baby Steps” and “Last Day” (covering the Kents getting married up til they find Clark, and Clark leaving Smallville to move to Metropolis, respectively). This is Morrison’s definitive take on the actual origin, and 40% isn’t by him, which is a strange sensation – he intentionally glossed over it in All-Star Superman. Here, Issue #5 (actually in 7th place here due to a necessary reordering) gives 14 pages to a very solid Krypton – though with no DCAU-style vistas or wider background – and, more charmingly, Jonathan and Martha finding Clark, arguing about whether to investigate the crash, and then working out a way to fake out the US military. The deformed calf they plant in the rocket ties in to the wider “present day” plot. The scene from Issue #6 (here 8th) is less significant – it involves how young Clark (age 5? 8?) was taught to fly by the Legion of Superheroes. It’s a nice scene, and very Morrisonian in those two issues to drop in slightly puzzling flashbacks via time travellers from the future talking in the present, but fairly insubstantial.
Fish’s “origin” work is actually rather better. Seeing the sorrow of the Kents at their fertility issues and the failure of treatments, the preparation for a long wait to adopt, the excellent exchange with their pastor (who, remarkably in ‘70s Kansas and most likely in a Baptist church), is African-American, Jonathan’s utter commitment to Martha and to hope – these are genuinely moving. Seeing Clark’s rocket descend, about to change their lives, is all the sweeter for this. So, too, is Clark spending time with Lana and Pete as they pack up the house before Clark goes to college – this is a “dead Kents” continuity, not my favourite, but done well here – and dwelling on the memories that have made him.
Morrison’s run, beyond the origin, consists of two plots – first, Lex trying to take out Superman, including an alliance with Brainiac (here drawing on the DCAU version of Brainiac as a Kryptonian AI, I think), and second, a Legion of Superheroes story where the Legion goes back in time to rescue “early career” Clark from a threat (from a certain imp) to the Rocket.
Both are good. Lex Luthor here is a monomaniac, obsessed with the alien threat – he’s a McCarthyite parody, in some ways, and working with General Lane to capture and experiment upon Superman. Clark is the more interesting character here; initially in t-shirt and jeans, cocky, the bleed between “campaign journalist” and “protector of the poor vigilante” quite clear. This is not Morrison’s All-Star Clark. There is an echo, in fact, of his Buddy Baker/Animal Man – eco-warrior and activist actor, as Clark here is an investigative journo who targets the wicked rich. The characterisation of young cocky Clark is well done, and Morales’ is mostly enjoyably bombastic in drawing it – though here we run into various fill-in artists within multiple issues, which does rather jar (Brent Anderson, Gene Ha, Brad Walker – all perfectly respectable, for what it’s worth).
Andy Kubert draws the other two issues, which is Morrison in his “reflective and confusing” mode, as already alluded to. Kubert is a superstar in his own right, and his designs for the Legion are great fun, but – and this is true of Morales too – none of it is in “blow you away” territory. His young Clark out in Kansas is fun, though.
To conclude, the other backup covers what happens in Metropolis after a section is stolen by Brainiac – focussing particularly on John Henry Irons, who originates as Steel in the main comic. These are both solid – Steel is a great character – but are not as attractively drawn or as compelling as the Kansas backups.
Overall, Morrison establishes his world well, characterises well, and builds his cast well – aside from the Kents, Clark, and Lois, we get allies (Steel and the Legion) and enemies (Lex, Brainiac, the imp, and arguably General Lane) set up memorably. One already regrets that he won’t get many more than these 8 issues to build his Superman – his writing is always sharp (if sometimes in a “dagger to the brain” sort of way), and his understanding of the mythologies of his characters is nonpareil.
Collects Action Comics #1-8.
8/10
(*) = Detective Comics is older, but Superman debuted in Action Comics before Batman did in his title.
New 52 Shazam! Volume 1 W: Geoff Johns, A: Gary Frank
Originally a Phase 2 and 3 Justice League backup, this has no chronological links to that point in the timeline, so can be safely read alongside Phase 1 books – and you should, because it’s very, very good.
Shazam!/Captain Marvel – here solely Shazam! – had had a funny history in the decade or so preceding the New 52, popping up here and there. This is a careful reinvention and expansion of the mythology, which Johns got to build on not just in some tie-ins and one-shot issues in Forever Evil, Convergence, etc, but also in a 15-issue standalone run from 2018-2020 which, whilst not quite to this standard, is still well worth reading.
The chief features of the reinvention are that Billy Batson is an embittered kid in care, bounced from foster home to foster home; and that his new foster home involves not just the usual Captain Marvel Jr and Mary Marvel characters (Freddy and Mary), but three other foster siblings who end up becoming part of the Shazam family and sharing Billy’s power. They face up against an alliance of Doctor Sivana and Black Adam, with Mister Mind teased at the end – the whole major Rogues’ Gallery (Mister Mind is the main antagonist in the later ongoing series).
This brims with joy – Johns’ scripts are bouncy and fun, his characters are distinctive (I can actually say what distinguished all 6 kids, which is tough on a team book!), Frank’s line art is clear and cinematic in a Modern, post-Jim Lee way, and Brad Anderson’s colours are an excellent and bright selection from the mid-range. Basically, better than much of Johns’ actual Justice League run – and leans into Johns’ strengths round intimate moments and character relationships.
Collects backups from Justice League issues #7-11, #0, #14-16, and #18-21 of Justice League – 12 “half-issues”, equating to 6 issues, a fairly standard New 52 TPB.
9/10
New 52 Nightwing Volume 1: Traps and Trapezes W: Kyle Higgins, A: Eddy Barrows
Kyle Higgins really gets Dick Grayson’s voice right. This is one of the best New 52 books I’ve read for actually capturing character voice – better, say, than Lemire’s Animal Man, which is otherwise a stronger book than this.
What works here – and a lot works – generally revolves around Higgins’ grasp of Dick’s character, and Barrows’ fun, dark-toned but glossy art. Barrows does seem to go off-model semi-regularly – Batgirl’s appearance is very inconsistent – but he does a few great portrait pieces and is very strong on Nightwing himself, as well as the action.
The plot is a “Dick goes back to the circus” type – but this time, he’s handed ownership by old Mr Haley, and begins to find layers of secrets...ultimately tying in to the Court of Owls and Batman Volume 1’s plot. A particularly nice moment late in this collection is a direct parallel to a scene in Batman, where Bruce strikes Dick, loosing a Court tracking device – but here, from Dick’s perspective, we get a completely different emotional tenor. It’s very clever.
Collects Nightwing #1-7.
7/10
at March 10, 2022