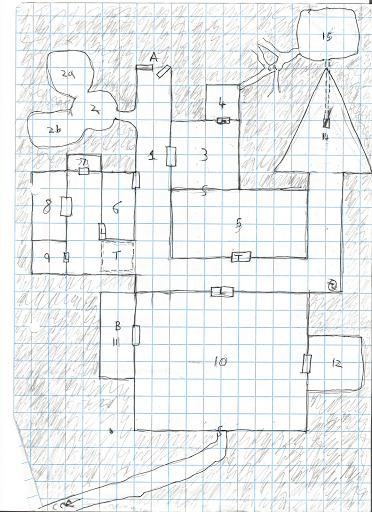 Well, here's the first of the announced Alpha/Beta adventures. Weirdly, this is both - because of a local lockdown that has descended here upon us in North-East England, the Alpha test has been paused about 1/3rd of the way through. However, it was running fairly nicely to that point, so I'm just going to put that out. This has also had one Alpha reader - a respected OSR designer who thought it was pretty good, which I took as high praise.

"The Workshop of the Gnome Artificers" is technically in the Kron Hills of Greyhawk, and is the largest of my expansions to "Temple of Elemental Evil". It's abandoned, evacuated by its owners during a past war, but guarded by Automata and a raft of illusions and traps. It's fairly "looped" on its single main level and key sub-level. There are also three Entries, including one via a Young White Dragon's Cave (which really explains the level range - maximum looting is probably going to be best accomplished by tougher characters with more spells). It's an exploration and puzzle dungeon, with a range of "diversions" and a *lot* of interaction.

Find the key and the map here. Tell me what you think.

Well, here's the first of the announced Alpha/Beta adventures. Weirdly, this is both - because of a local lockdown that has descended ...