ADVENTURE: The Monastery of the Chuckle Brethren (Levels 1-2) (and "Dungeons of Loam Country") 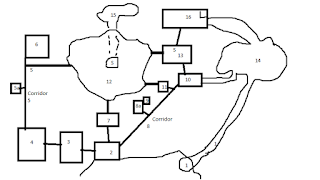 Link here to the Google Drive containing my (free!) adventures and surrounding setting material. This is the first I'm putting up, though it's actually the least tested, because my playtest groups haven't gone for it. It's a slightly anarchic mix of silly traps, illusions, and mobile combats - it's chiefly a "hostile environment" dungeon, though not entirely. Heavy on the humour (too heavy for some people). See below for a precis if desired, or just read the doc.

It's set in my own setting, The Borderlands (Elidor+Narnia+80s-90s British Kids TV). So, as a bonus, here is a list of the dungeons of "Loam Country", the great area of black earth and wilderness between Gosswold (classic starting town) and the City of Quinces (a great city set in the branches of a giant rhododendron). Two of these dungeons are fully written up, one is fully planned, and one (very big one) is being written now.


The Monastery of the Chuckle Brethren - The “Chuckle Brethren” are an order of Gitsie monks who pose as bandits on the roads of the Loam Country, so as to attract the attention of adventurers to come and test out their monastery’s assorted “pranks”. There are other mysteries to discover there, too. [Levels 1-2, 16 rooms]

The Barrow of the Woad Chief: A large ancient barrow just outside the Gosswold’s town limits. Blue light is said to issue forth on cloudy nights, and local boys claim that there are secret tunnels inside. It hides a secret annexe where an Archon of the Old Water God produces goods to offer to the godling, and a sublevel which is a still-consecrated Shrine of the Old Water God. [Levels 1-3, 23 rooms]

The Tree Village Hideaway of Rollo Hatt the Bandit Prince – A picturesque village set amongst the branches of great trees and forest glades, prime territory for a band of jovial folk heroes. Unfortunately, it is instead ruled by Rollo Hatt, the vicious and pun-obsessed arch-bandit of Loam Country. [Levels 1-3, 25 rooms]

The Cold Flood – A frozen lake riddled by a great network of tunnels and ice caverns leading down to an unfrozen underground sea inhabited by Merrow loyal to the Kind Masters. The caverns include one formerly consecrated as a temple to the Old Water God. [Levels 2-9, approx. 150 rooms/areas]

The Great Carpet - On a steep hill stands a simple building, reminiscent of a temple, with a marble base and columns supporting an arched roof. Inside there is only one thing - a broad, richly decorated, finely woven carpet. If you step on to it, you discover its true nature. The scenes depicted come to life around you - you have entered into one of many epic poems so depicted, which you must travel through to escape the Carpet. [Levels 2-8, approx. 100 rooms]

Lost Elariel - A panoply of white spires and stained glass in the midst of a ruined town, this was once the summer palace of the Lady Shimmersong, a Kind Master of artistic talent and surprising empathy. She disappeared from the Borderlands even before the other Kind Masters; why remains a mystery. The answer may be inside – along with, by repute, her great treasure. [Levels 4-7, approx. 25 rooms]

The Flying Garden of the Silken Archmage - A great rock floats through the air. Roots trail from its underside. On the top are a vast array of gardens and mini-palaces - the abode of the Silken Archmage, a silk-printed Book Person of great arcane power. He is indifferent to the plight of those below his flying palace, largely seeing the world beneath as a resource for his experiments (this sometimes goes down badly). His gardens are full of illusions to beguile interlopers, as well as stowaways, whose friendship or enmity might be earned by adventurers. [Levels 4-10, approx. 80 areas]

The Sacred Workshop of Pimbob Buttersnap - The abandoned workshop/temple of the Brownie master-artificer Pimbob Buttersnap. It is full of funky, not entirely safe gadgetry, some interlopers, and the natural effects of decades of abandonment. [Levels 6-10, approx. 60 rooms]

The Waterfall Portal – Formerly a shrine to the Old Water God set behind a secluded waterfall and lake, now the lair of cultists loyal to the Kind Master Sir Jack Bloodhair. There is a portal to Sir Jack’s castle in the High Borderlands, accessible via blood sacrifice of a sentient creature. The cultists operate an imitation Wyld Hunt to procure offerings for their liege. [Levels 7-8, approx. 12 rooms]

The Sky Chapel – An isolated chapel dedicated to the Sky Lord and ministered to by Frere Barthélemy, the Sky Chapel is both a place of safety and rest in Loam Country, and the seal on an extra-dimensional rift imprisoning a presence defined by abstract philosophy, and obsessed by the prospect of absorbing others into itself. [Levels 8-10, approx 20 rooms]
at February 04, 2020

ADVENTURE: Barrow of the Woad Chief (Levels 1-3) (and "Ancestries of the Borderlands")

Another Borderlands adventure, this time one which has been fairly well-tested - The Barrow of the Woad Chief, a low-level dungeon near...

Blogs for Running the Game